The art of eating (well!)

Points of view
by Pier Moro

It is an Italian specialty: to find a restaurant where you can eat deliciously. Here it is important to note here that Italians love home cooking, especially if mom cooks. But if you travel all over the world or you are on a business trip, you can not take your mother everywhere with you, so that she prepares dinner for you!

But the most interesting thing is that the concept of a good restaurant in Italy is completely different from that of the Russian Federation. If in Italy the priorities are good food, cleanliness, comfort and, lastly, the look of the place; in Russia there is design of the restaurant at the first place. Everything else is secondary.

The person who managed to connect European and Russian requests is restaurateur Arkady Novikov. It was he who started his entrepreneurial activity in 1992, having opened his first restaurant “Sirena”, which still works today. From 1992 Novikov has already opened 58 restaurants throughout Russia, as well as in London, Dubai, Miami and Riyadh.

Personally, I fell in love with the restaurant “Nedalny Vostok” on Tverskoy Boulevard 15 in Moscow. It is good both from the point of view of design and from the point of view of the organization of space concept, in which the kitchen is separated from the hall by glass partitions and you can see how the staff work, the chef and, most importantly, you can see the cleanliness of each corner.

The first restaurant I tried for the first time in Rostov-on-Don (2013) was the Grill Restaurant “New York”. It should be noted that, in terms of interior design, there is nothing to comment on. Both “New York”, “Bellucci”, “Pirs” (in summer), and “Onegin Dacha” are worthy of note if we consider that we are in the so-called “Regions” of Russia, always considered as extreme suburbs and well far away from European standards … well! With “good restaurants” the symphony is totally different. And the prices are European too …

If we want to give some reports in Italy I can recommend two restaurants in Milan: the “Quarta Carbonaia” on viale Regina Giovanna for meat (exquisite) and “Da Stefano il Marchigiano” on Via Arimondi 2 for fish. In Rome I’m at home at “Da Nino” on via Borgognona 11 near to Piazza di Spagna, in Forte dei Marmi at restaurant “Maitò” on Viale della Repubblica 9, in Vicenza “Da Remo” on Contrà della Caimpenta, 14 (although I know that the address will change).

In any case, the excellent restaurants that I have been visiting for more than 30 years, over the years have not changed their appearance in terms of interior design. And people still come there to eat.

If you are traveling around the world I can point out 3 restaurants that have an important place in my life: the “Osteria San Lorenzo” in London SW3 in Beauchamp Place; «Las Mañanitas» in Cuernavaca – Mexico in via Ricardo Linares 107 and «La Mansión» in Mexico City in Paseo de la Reforma 276.

I came to the “Osteria San Lorenzo” in 1989 and, thanks to my friendship with Mara Berni, I met celebrities such as Dustin Hoffman, Erik Clapton, the Duran Duran group, Clint Eastwood and many others. Unfortunately, my friend Mara died on April 10, 2012 and bringed away with her many of my memories of that period.

When I was a child, my father took me to the “Las Mañanitas” restaurant. A charming place with a huge garden where tables are set. A restaurant where you simply forget about the time that passes between the snack, main course and dessert. I hope that I can bring my children there to eat at this restaurant, as my father did many years ago, and this will be our family tradition from generation to generation.

Also at the restaurant “La Mansión” was my father who brought me there for the first time. I often go to this place when I visit Mexico city. This is a special place for meat lovers. Wonderful service and unique design: it is always very cozy, modern and stylish.

Today at Art Studio HOUSE, we take care not only to go to restaurants but we also design them, thanks to the help of our consultant and friend Danilo Facconi who has a long experience in the restaurant industry, his experiences touch the historicals excellences of some famous places all over the world like Cova in Milan in via Montenapoleone and the Bosco Cafè in Moscow in the Red Square.

Our goal is not only to make “beautiful restaurants” in just interior design terms, but to combine the winning formula between gastronomic quality, quality of service, hospitality, organization and, above all, 100% cleanliness.

Obviously, with an excellent interior design project to complete the work … 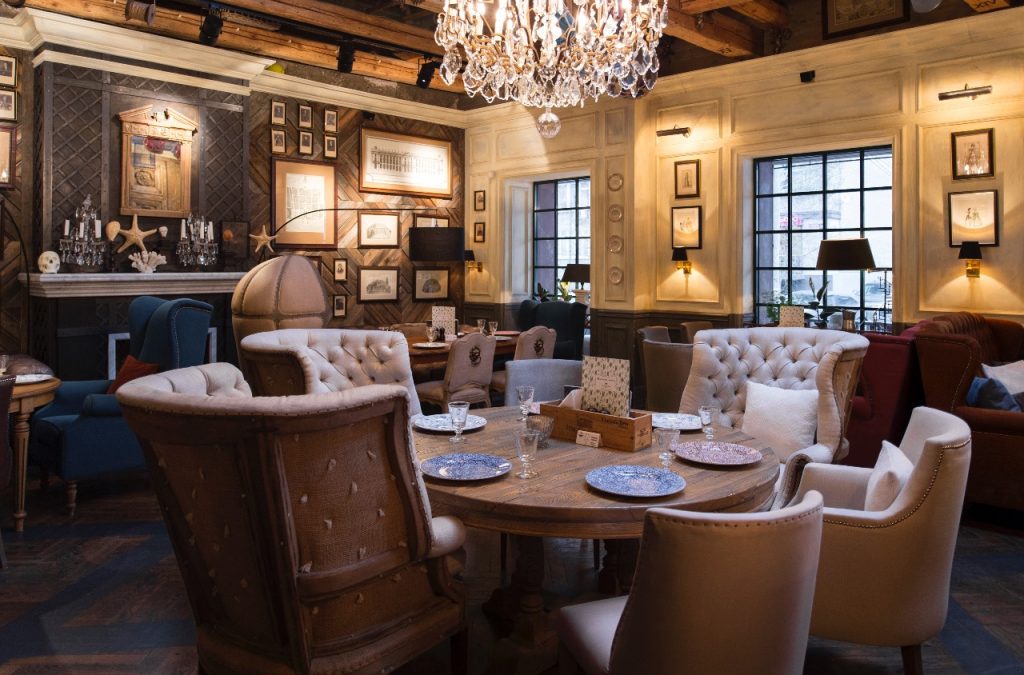